The audience get ready to join the performance

An example of the trail sheet

After the vegetation was a cleared the new picnic bench arrived

The group gather outside Wheal Martyn

The Clay Trails team displayed information, routes and maps at the Tracks and Trails Expo

In October the Clay Trails partnership officially constituted themselves.  This means that we now have a strong, dedicated community group made up of passionate people who will safeguard the future of the Clay Trails.  If you are interested in joining the group or would like to find out more please contact us here

We hosted a fun, free, cycling adventure along the Clay Trails for the whole family.  Starting at Wheal Martyn around 60 people joined us for a group cycle to Knightor Winery (some took on the extra challenge of the additional 5 mile Eden Project extension circuit).  Cyclists were invited to collect special stamps along the way to be entered into the raffle at the end. At Knightor there was a fantastic BBQ, a smoothie bike, children's entertainment and raffle.

Burn The Curtain theatre company performed The Adventures of Don Quixote by Bicycle along the Clay Trails. This was a show with a difference; the actors and the audience travelled together by bicycle, as they experienced the colourful and misguided escapades of Don Quixote - self styled Knight of La Mancha. This exciting piece of interactive family theatre involved actors riding custom designed bikes; tall, wide, beautiful and strange, cycles that even a medieval knight might be proud to ride. As part of the show the audience also decorated their bicycles, some even turning them into horses!

One of the first ideas that was actioned following the first meeting of the Clay Trails group was to install a horse tie-up area at Wheal Martyn Museum and Country Park. This provided riders with a valuable pit stop along the trails where they can make use the cafe and toilets at Wheal Martyn safe in the knowledge that their horse is secure outside with access to water. 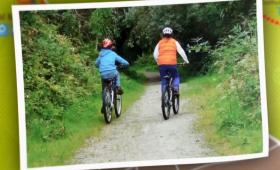 Family fun on the trails

Choose from a range of short routes for cyclists, walkers and horse riders along the Clay Trails.

Geocaching on the Trails

Use your smartphone or GPS to try one of these outdoor treasure hunts uploaded by members of the public.

Find geocaches in the area